Forms to be returned before 31st July

The Entry Form EuroCup 2023 must be completed by all clubs (including those that want to bid to host an event) and returned to the IWBF Europe Competitions Commission as soon as possible but certainly not later than 31st July 2022.

Clubs that have never participated in the EuroCup are welcome to join the competition!

They are required to fill in the EuroCup Entry Form and submitting it like any other club (note: save filename as ‘NEW-00 + Club Name’).

Depending on the number of teams entering the competition, new clubs could qualify for the lowest EuroCup tournament opening or for the Qualification tournament to get a spot in the EuroCup3 of the following year.

Any Club who would like to host an event of EuroCup 2023 can make a bid by completing the ‘Bid Document Host of EuroCup 2023’ and for each hotel, the ‘Form A – Accommodation Information’.

Clubs may initially register up to 24 players from all their Club teams on the Team Statement. This Team Statement must be signed by a national or international licensed Classifier and also signed by the NOWB.

Total of 55 teams competing and 170 games 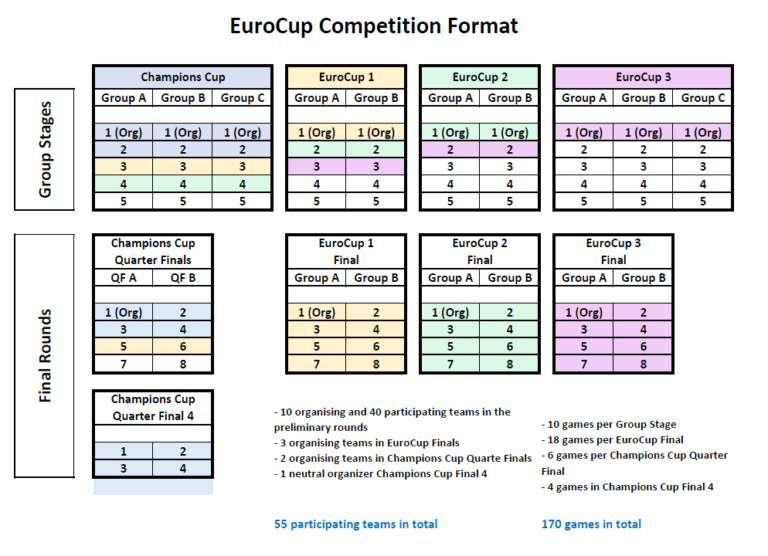 Allocations and organizers are assigned based on ranking points. No ranking points were awarded for the 2020, 2021, and 2022 competitions, so the ranking points from EuroCup 2019 will be used to place clubs into the preliminary rounds for the next competition. Full EuroCup Ranking can be found HERE

A Club may request before 1st September 2022 a Wildcard. This request must be supported by the NOWB who will make the request on behalf of the Club. The Wildcard can be used by a club to request placement in higher or lower division of Group Stage than would be the situation if the place was decided by their ranking. The Competitions Commission will consider all wild card requests and their decision will be final. 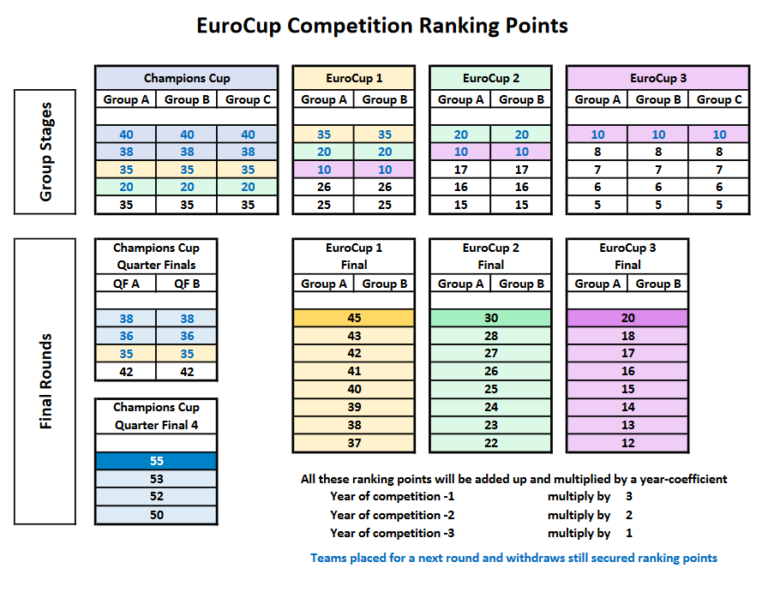 In 1976, the Belgium club Wapper Antwerp organised a club tournament, called EuroCup. After a meeting with Mr Hans Tukker (NED), Mr André Vergauwen (BEL), the chairman of Wapper Antwerp, and Mr Willi Brinkmann (GER), player/manager of BSG Duisburg-Buchholz, accepted Hans Tukker's invitation to form together the organising committee of the WEWBT. The first finals of the WEWBT were held in IJsselstein (NED) in May 1976 with the following ranking:
1. ISA Amsterdam (NED) 2. SC Antilope (NED) 3. BSG Duisburg (GER)

One year later, 16 teams took part in the WEWBT in two divisions. They were held in Antwerp (BEL), Duisburg (GER), Lokeren (BEL), Bonn and Cologne (GER).

In 1982, for the WEWBT, the committee changed the system in 1st Division with preliminary rounds and a final round.

Also it lowered the number of teams to a total of 22 teams. For the first time the preliminary rounds were held in March instead of the autumn.

In May 1983, the ISMGF recognised the WEWBT as the official European Championship for club teams. The Committee decided to change the name WEWBT to EuroCup, the name of the former Wapper tournament.

In 1988, as experiment, the EuroCup Committee organised the runners up tournament, The André Vergauwen Cup (AVC) was born. The EuroCup changed into Champions Cup.

In 2009, the Competitions Commission started with a new formula in the EuroCup competitions, with 55 club teams participating. The preliminary rounds are called EuroLeague 1, 2 and 3. From this year a total four finals are being held, the CC, the AVC and WBC. New is the Challenge Cup.

Nowadays the EuroCup Competitions consists of 1 Champions League and 3 EuroLeagues.