GER-ESP for the gold medal, FRA-POL for the access to World Championship U23

GER-ESP for the gold medal, FRA-POL for the access to World Championship U23

Four more exciting games took place today in Lignano, Italy. Germany and Spain won against Israel and Turkey, getting access to the European final U23. Poland and France won against Italy, making tomorrow’s match the game for the 5th place. 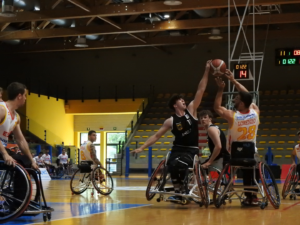 Poland starts the game with a two 2-points shots by Szymon Gładysz. While the first period is led by Italy with a partial of 10-15, Poland takes the lead in the second one closing the first half at 27-25. A really close second half followed, with partials of 11-10 and 10-12. With a 2-points shot by Lorenzo Bassoli, Italy leads the match by 3 points three minutes from the end of the game. Two minutes to go, following a 2-points layup by Szymon Gładysz, the score is set at 46-47. Poland misses three shots in the last 35 seconds. With less than a second left, Szymon Gładysz’s 2-points layuo brings Poland to victory with a final score of 48-47.

With a partial of 10-18, Germany builds a gap of 8 points in the first period. In the second period, Israel tries to close the gap, but at each point made, Italy gets back with another shot, leading to a score of 22-33 after the first half of the game. Following 5 points made by German’s Alexander Budde, the gap between the teams reaches 16 points. The Israeli team does not give up and is able to reduce the difference closing the third period at 36-48. In the third period, Israel, led by Amit Vigoda, gets closer to Germany. Just 5 points are now dividing the two teams with only 3 minutes to go. With an higher percentage of shots made, Germany is able to close the game at 49-61 and get access to the European final U23.

The second semi-final starts with a close first quarter, ending at 17-16. At the end of the second quarter, Spain creates a 10 points gap, which was slightly reduced 28 seconds from the end with a 2-points layup by Mahmut Açikgöz from Turkey, leading to a half time score of 28-20. In the third period, the Spanish players create a more comfortable advantage, which they keep expanding with a last partial of 26-9. With a final score of 73-39, Spain gets access to the final against Germany.

France takes the lead as the game start, creating a comfortable gap already in the first period, closing it 9-23. Italy gets in the game in the second quarter. However, it is not enough to stop the French team, which reaches a score of 20-41 at the end of the first half. Led by Manuel Gomez and Mamady Traore, France closes the third quarter at 32-58. Italian’s Lorenzo Bassoli and his teammates lead the last quarter, reducing the gap from the opponent to 16 points, five minutes from the end of the game. To every next shot made by the Italian team, France counterattacks, closing the game at 51-68.

Israel, Turkey, Spain and Germany: semi-finals and World Championship U23!

The preliminary rounds of the European Qualifiers for World Championship Men U23 ended with Israel and Spain at the... read more

First victory for Spain, and second ones for Turkey and Israel!

The European Qualifiers for World Championship Men U23 are on!

After being postponed twice, the European Qualifiers for World Championship Men U23 have started today in Lignano Sabbiadoro, Italy!... read more

In July the last two places for the ECMA will be decided!

The European Championships for Men and Women – Division A – will take place in the same place, in... read more