RSB Thuringia Bulls and RSV Lahn-Dill to the finals!

RSB Thuringia Bulls and RSV Lahn-Dill to the finals!

Today was again full of great and exciting games. 5-8th placement games and semifinals of the Champions Cup 2021 took place at Rittal Arena, Wetzlar, Germany, hosted by RSV Lahn-Dill. Two teams from Germany and two teams from Spain played in the semifinals to get access to the final game, which will take place tomorrow afternoon at 17.30. As result of two games full of exciting actions, RSB Thuringia Bulls and RSV Lahn-Dill will compete to bring home the cup!

The game started with a score of 20-18 for Basketbs96 Rahden after the first 10 minutes. With a 3-points shot made by Óscar Onrubia, 3 seconds from the end of the first half, BSR Amiab Albacete closed the second period at 33-37. From then on, BSR Amiab Albacete kept increasing the distance from the opponent, first by 14 points (third period: 51-65) and finally by 23 points closing the game at 59-82.

With 30 points scored, Krzysztof Bandura is points leader of the game. Total rebounds and assists leaders are Lee Manning and Ghazain Choudhry from BSR Amiab Albacete.

The first 5 minutes of the second 5-8th placement game saw GSD Porto Torres leading with a score of 8-2. A 3-points shot by Arie Twigt, a lay-up by Jorge Sanchez and a 2-points shot by Rose Marie Hollermann took BSR ACE Gran Canaria in advance, who first reached 21-32 at the end of the first half. 10 more minutes and the Spanish team created a gap of 16 points from the Italian team. Finally, BSR ACE Gran Canaria closed the game at 39-81 with 42 points of difference.

A closed game in the first two periods closed respectively at 18-16 and 35-42. At the end of the second half, RSB Thuringia Bulls took the lead and maintained the achieved gap the whole third quarter. 10 minutes left and RSB Thuringia Bulls kept increasing the gap from the Bidaideak Bilbao BSR and closed the game at 63-85.

RSV Lahn-Dill started the game with a small advantage and kept increasing it throughout the first 20 minutes, closing the first half at 39-29. In the third period, CD Ilunion was first able to close the gap created, but it did not last long as RSV Lahn-Dill was able to get distance from the opponent again (third period 58-46) and finally closing the game at 76-61.

Special measures have been prepared to ensure the Champions Cup can proceed with safety and the health of everyone participating in mind. Regular testing for coronavirus is mandatory for everyone involved and the participants are forming a ‘bubble’ with no contact outside the hotel and arena. 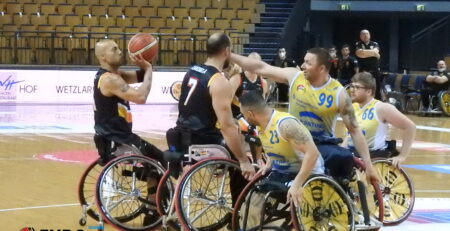